The sales of Christmas Aquavit is followed in an SAP system

A Norwegian company with subsidiaries in Denmark, Sweden, Finland and Germany that develops and sells well-known Norwegian and International spirits brands to as example Vinmonopolet. Example of brands are LINIE aquavit, Løiten aquavit, Braastad Cognac, Gammel Opland and Vikingfjord vodka. 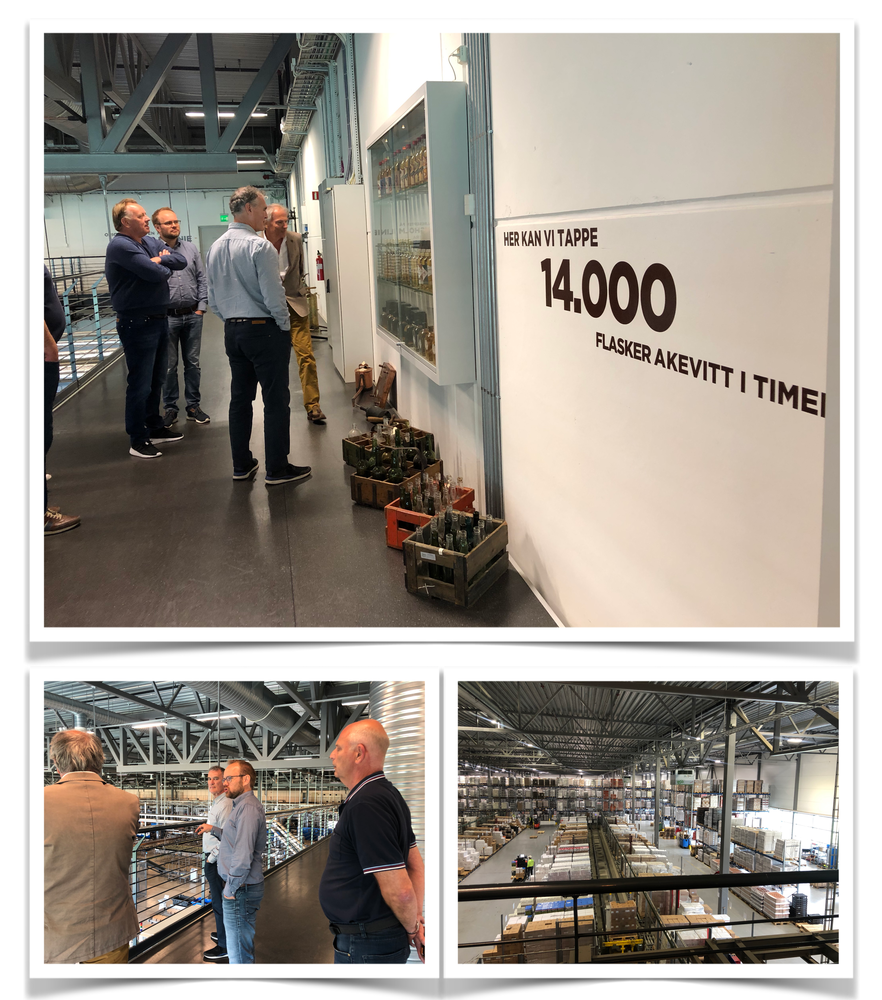 Text on wall: Here, we can bottle 14.000 bottles aquavit per hour

Kjell Jensen CIO at Arcus, a leading Nordic branded company in wine and spirits. Kjell is an elected volunteer in the SBN Core Leadership team. Kjell had invited the CLT to Arcus for a Board meeting. The Corona pandemic unfortunately made it impossible for so many people to meet in person at Arcus. Arcus was at the time still open for a smaller group of people and therefore the in Oslo located SBN-Adfahrer team had the opportunity to visit Arcus at Destilleriveien in Hagan.

Kjell and his colleagues shared information about the IT environment including SAP. In additiona we were also invited to a guided tour where he talked about the company, the processes and the products. See a pictures and the high level summary. 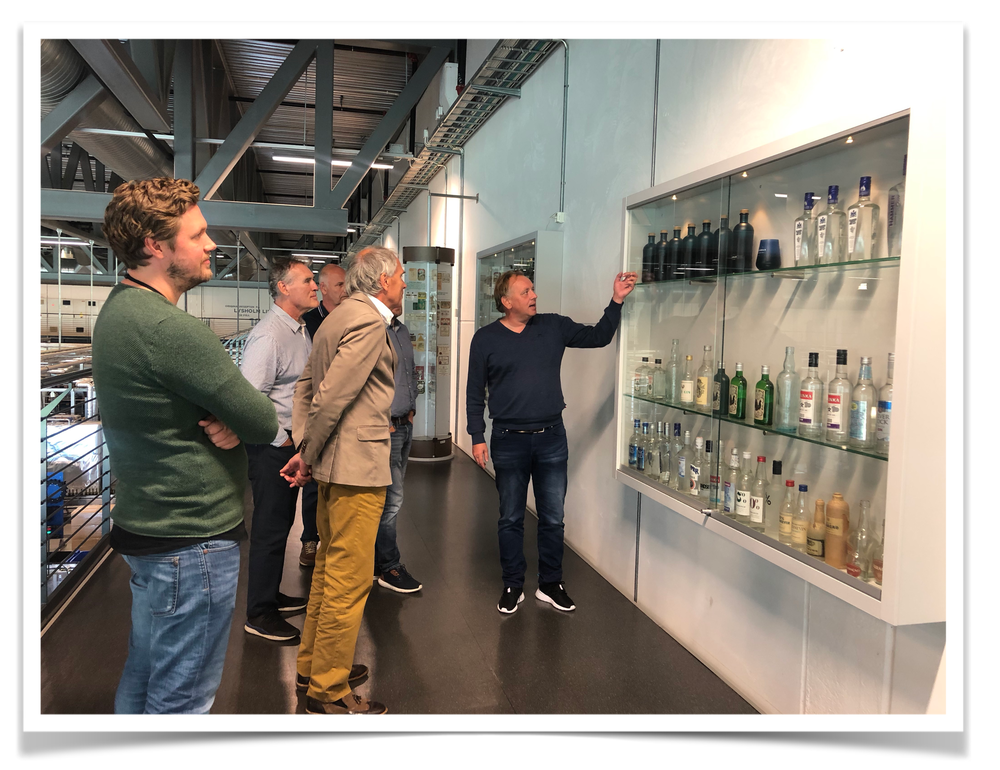 Arcus has roots go back to the early 19th century when aquavit was transported in barrels across the world's oceans. The aquavit is still transported on boats and the trip takes about 4 months. There are at all times about 1500 barrels (500 liters) with Linie aquavit on Rederiet Willhelmsen's boats, which cross the equator on the trip back and forth Norway from Sidney in Australia. 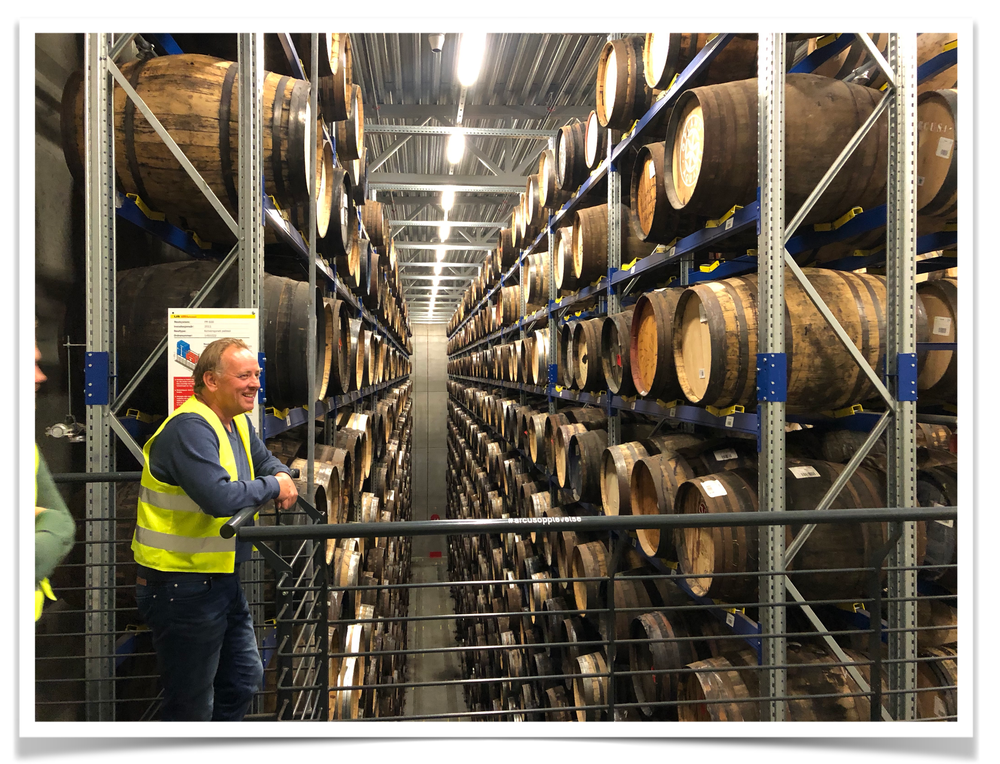 In 1996 Arcus-Gruppen and Vectura became separatedas a result of  EEA regulations the company Vinmonopolet had to be split up. This made it possible to keep the state monopoly for consumer sales. Import, production, distribution and export was sold out by the state. The distribution in Vectura is own by Arcus and the Arcus facility is new built and very modern as you see in the pictures. 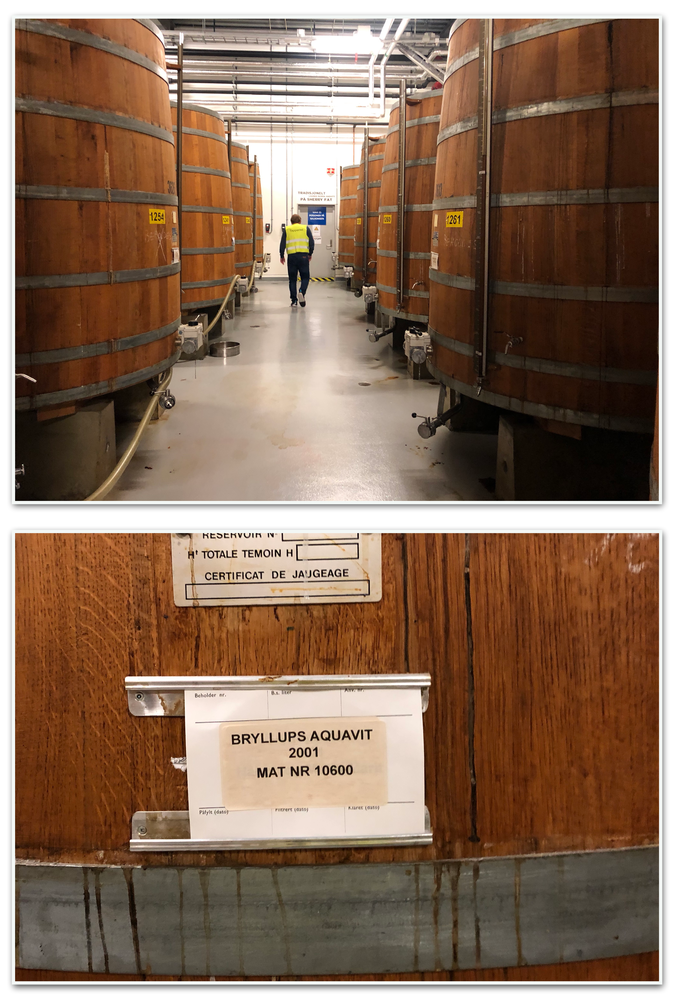 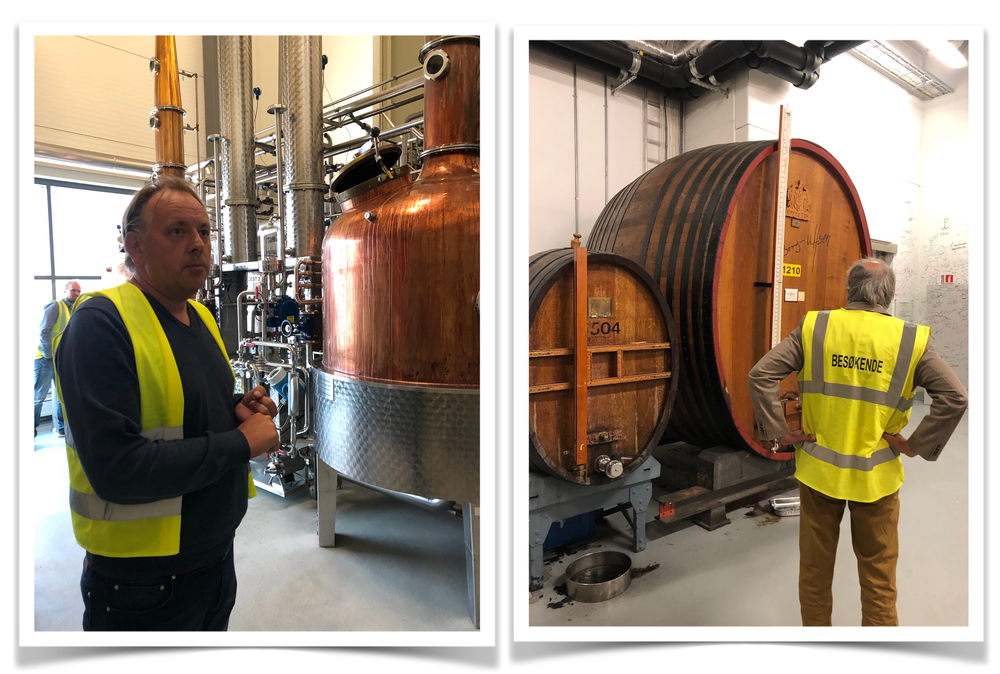 Above production and storage, Kjell and Didrik 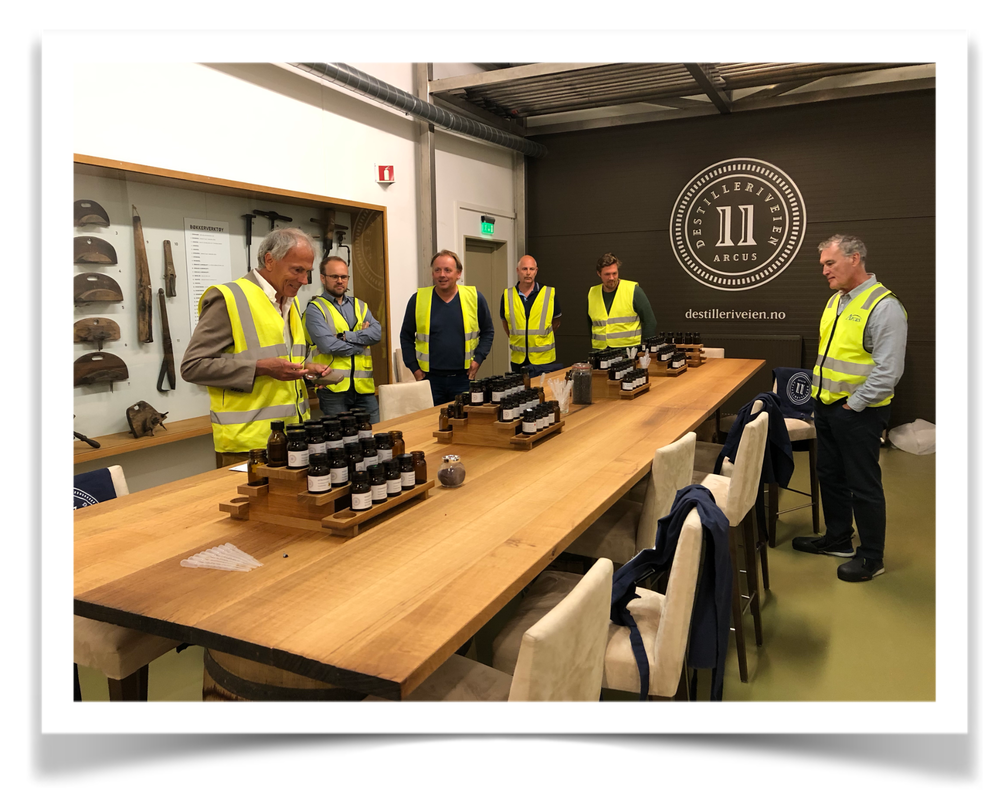 Picture above, the large table to mix your own aquavit in the customer showroom. It's possible to come in groups to Arcus and do this as a company event (in non pandemic times). In picture, the team at this visit, from left. Didrik Arstad, (Head Finance SBN), Erik Lindblom (SAP Manager Arcus), Kjell Jensen (CIO Arcus), Knut Hafslund (ABAP developer Arcus), Vegard Rafteseth (BI Manager Arcus), Martin Bronwsword (Head IT, Projects and Retail SBN). Missing in the picture is tonly he photographer, Eva-Maria Fahrer SBN 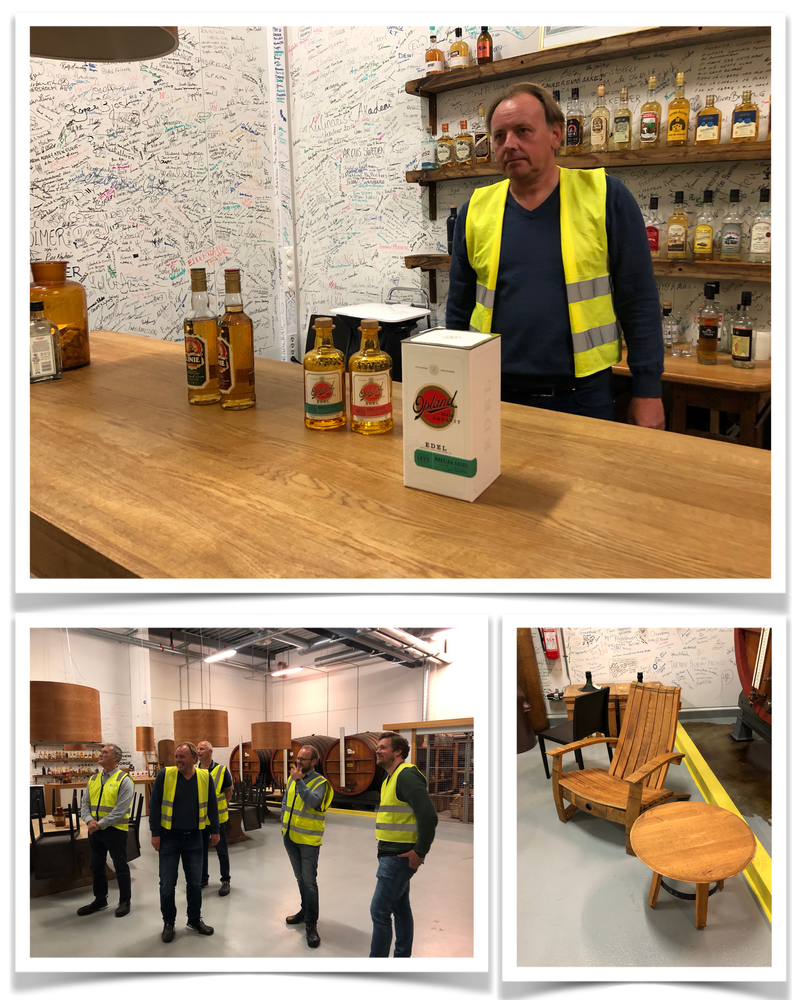 The customer showroom has this nice bar (Kjell behind the counter) and some furniture made of old barrels built by an Arcus person in his spare time. 😄  The walls in the bar has signatures from people who have been visiting

There have over the years been many structural changes and next in line is a merger with Altia a Helsinki based company. The merger has to be approved by the national Competition Authorities and will most likely happen in first half of 2021.The new company, wich will be named Anora Group PLC, will have a unique brand portfolio and have more resources for developing new products.

The Corona pandemic influences not only our visit it has also resulted into more alcohol bought atthe Norwegian  Vinmonopolet. For Arcus this has increased their sales during 2020. This had been difficult too foresee but it is exciting to think that the numbers for the sales forecast for as example the Arcus product Christmas aquavit is to be found in a BW at HANA and the financials in an SAP system.

Production, Packaging and Warehousing systems are very important and there are many interfaces into SAP as these systems are non-SAP. In the pictures you see the advanced high-bay system.

Arcus is looking at upgrading their SAP environment too S/4HANA but focus during this autumn was on IT infrastructure for the Group's companies. The upcoming merger may also influence upgrade plans.

Kjell plans ahead in a 5-year road map which he changes to adapt the changes and wishes of the group companies. The plan for an S/4HANA upgrade includes a conversion to the new General Ledger in SAP and Business Partner concept which has replaced customer and vendor. Cleaning of master-data and structures which are not used anymore is also a heavy workload part of the plan.

Every IT project must have a clear Return of Investment (ROI) to be implemented. The focus is on benefitting from the synergies after the  S/4HANA project. The early plan is to do an upgrade to S/4HANA and step by step benefit from the process improvements that come with the new version of SAP.

The new User Interface, they look forward to. This interface has tiles, ie 4-edges with key figures and easier-to-work screens. A Central Finance solution is being looked at for the groups financial data.

Reporting is high on the agenda and everyone looks forward to evaluate the reporting functionality in the new S/4HANA environment.

Next year the sales of the gold winning Skagerrak Nordic Dry Gin and the fancy “Julestemning akevitt” in picture below, may even be followed in a S/4HANA system at Arcus.

Below pictures from the Historic showroom with drawers to open, containing flavours and spices to enable the guest to use all senses

Thank you Kjell for a fantastic guided tour and this nice experience!